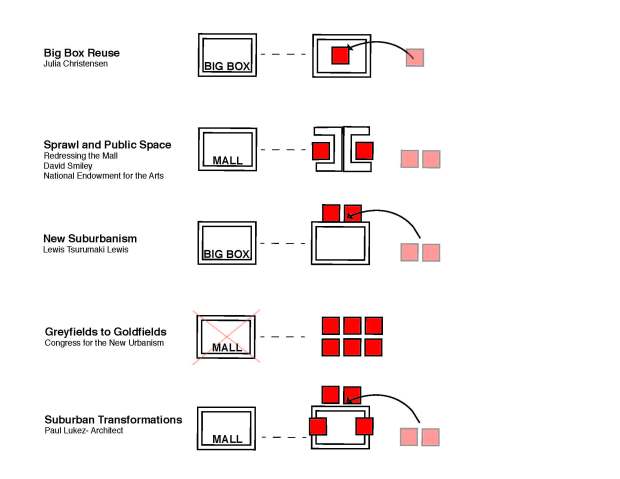 Abstract: The many definitions of the word anchor iterate its role as a body of weight that restricts motion and binds a body to a specific place. Whether it is the Town Square, Main Street, or City Center, every society in a built environment revolves around an anchor. The anchor of a place provides common ground, public space and economic resources.  However, due to continuous suburban sprawl, the majority of Americans now live in a built environment without a traditional anchor; they do have, however, the major definitive element of suburbia – the retail anchor.  Retail anchors in the form of malls and big box stores “anchor” the suburban context in which they reside, however, due to the nature of sprawl these anchors are continuously moving outward in pursuit of bigger, better and cheaper development, failing to fulfill the role of a true community anchor.  Sprawl has left the suburban environment spotted with large, vacant buildings often holding little architectural or historical significance.  These defunct structures still retain the value of once, if only briefly, anchoring the suburban community surrounding them and the question of their reuse is a common undertaking of those in the design community.  Is there a correct typology for using the existing infrastructure and central location of vacant malls and big box stores to provide a new anchor for suburban communities?  By understanding several attempts at both “de-malling” and “re-malling” these structures, a set of criteria may be reached for adapting this form of anchor.